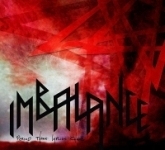 Originally started out in Oslo, Norway in 2004 (under the FROST moniker), Norwegian modern and technical Thrashers IMBALANCE seem to take the world by quite a menacing storm indeed. "Period Three Implies Chaos", which is the band’s debut studio album, was recorded in between 2008-2010, is surprisingly tightly executed, partly groovy Thrash with slight Death Metal overtones wrapped around it. The band is led by Harald Eilertsen (on vocals and bass), who has earned his spurs in such an act as THORNS before, obviously had a clear stratagem ready when he tried to envision during his most lonely and darkest hours how he wanted his new band to sound like: IMBALANCE sound mean, brutal and murderous – hammering your head ruthlessly non-stop like some maniac Arnold Schwarznegger clone in steroids. The band allows just a tiny space only for some occasional dark melody lines in their songs; otherwise IMBALANCE just attack on us listeners from every possible direction, pretty much mangling us to dust. The riffs are hot, sharp and utterly heavy, solos are spot-on violent spurs, Harald’s raspy and severe beast-like vocals come out biting each of our necks mercilessly – and what’s really most important here, the wholeness is truly convincing altogether. IMBALANCE haven’t taken the shortest road by relying on some known and widely accepted safe sounds but instead have done something remarkable on their debut album, which allows them to gain quite a lot credit as as an unique sounding extreme Thrash Metal act. ‘Ease Your Pain’ off "Period Three Implies Chaos", is the kind of a song that never basically let you go: somehow your finger always tend to find that already worn-out repeat button; that fuckin’ good the aforementioned song honestly is, believe me. Also, I am glad the production on this record allows guitars to sound shamelessly heavy and crispy enough, kind of adding an extra element into the album’s already head-punishing entity. So, in short, if you are searching for some original, brutal and technical Thrash with a modern touch, then here might be something right up your alley for sure. Oh, and IMBALANCE take no prisoners if I didn’t mention about that to you any earlier… www.imbalance.no