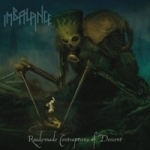 Norwegian Thrashers IMBALANCE’s brand-new outing is this 6-track 10" EP that contains 3 new songs, plus a cover song of Oslo’s Sleazepunk legends TRASHCAN DARLINGS (‘Me Punk, You Fuck!’), also added with a couple of live songs off the band’s 2010 debut album "Period Three Implies Chaos". As for these 3 new cuts, the guys’ darkened and tricky Thrash Metal seems to get even darker and trickier with time, which I of course have nothing to complain about. IMBALANCE’s are in their top form especially in the title track of the EP ‘Readymade Contraptions Of Descent’, in which some of the violent and tricky riffing does remind me of FORBIDDEN’s song ‘No Reason’ off the band’s 1994 album, "Distortion" (start listening from the 3:59 mark). Also ‘Totentanz’ pretty much impresses with the song’s rage-filled and hostile nature, plus about the fact the song’s overall very convincingly executed from start to finish, speaking great volumes for the guys’ abilities to write some bone-hard Thrash songs. What comes to TRASHCAN DARLINGS’ cover song ‘Me Punk, You Fuck!’ then – well, all I can say IMBALANCE’s version sounds punky enough (as it’s supposed to do so, I guess), and it’s actually kinda fun to listen to this cover song as well. But that’s about it. Both live songs ‘On Your Knees’ and one of my favorite IMBALANCE songs ever, ‘Ease Your Pain’, sound somewhat listenable but unfortunately both drums and vocals tend to overrun all other instruments pretty mercilessly in these 2 live songs. They should have seriously paid more attention to the live production, to make them sound more than just listenable. However, it doesn’t matter that much after all since it’s honestly speaking the EP’s 3 new songs that make this album worth investing though. More about IMBALANCE right here: www.imbalance.no