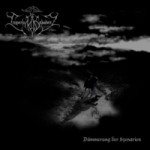 Second album for this German two-piece Black Metal act in two years only under Perverted Taste, after releasing two demos in 2005, and first time I face one of their recordings. Since the first listening of the first track I thought it wasn’t necessary to know from where they come from, because their sound says that perfectly, this is mid-paced German Black Metal, as cold and full of dark feelings as the bands of that country use to have. But in this case the tempo has some importance in the sound of this recording, as, because of that, it sounds a bit different to bands like LUNAR AURORA or HELRUNAR, to put an example, which use more the speed; in this case, the most important are the walls of agonic riffs, increased by the vocals, as well as the keyboards, which give to the whole another layer of atmosphere (but simply as monotonous passages which doesn’t make the sound too confusing) which remind me in some moments (being more melodic and with another feeling) of the first BURZUM, and, especially, to the last albums of SUMMONING, like “Stronghold” for example, although on a more Black Metal and less ambient way. Another thing which gives an interesting touch to this recording are the classical guitar parts, really well done, and some guitar solo, slow and moaning, but which contribute with some beauty between all this darkness, and make the rest less boring. The fourth and seventh tracks are totally in this way, as short intros (of more or less three minutes), with some water flowing and similar stuff, giving some pagan feeling. Anyway, the best part is coming from the guitar melodies, freezing as a snow storm, very German by the way, and which give goosebumps, as in ‘Der Dolch Im Gewande’, where they almost seem to speak. In this case, they are a bit faster, but on the next track they focus on lower tempos and remind a lot to the Austrian band mentioned before. A great discover for me, IMPERIUM DEKADENZ represents a good proof of how the German Black Metal scene is in a good moment, and, in this case, really inspired. www.pervertedtaste.de