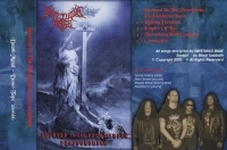 Despite the fact that a lot of KRISIUN clones pretty much dominated the scene lately, Brazil has always been a great country for extreme underground music. And Salvador’s IMPETUOUS RAGE is no exception to the rule. This four-piece got together in 2001, went through the typical line-up changes first and finally issued their debut demo "Decayed In The Pecaminous Profoundness" most recently. Recorded in December 2005 and produced by Thiago Nogueira (who had already worked with HEADHUNTER D.C. and INSAINTFICATION), it features 3 songs as well as a short intro and a cover of the old BLACK SABBATH tune ‘Cornucopia’. When it comes to their musical influences they mention bands like POSSESSED, NAPALM DEATH, MORBID ANGEL, DEICIDE and DEATH among others… Well, they’re all great of course, but I don’t think that IMPETUOUS RAGE sound similar to any of them. What I personally hear on this release is a solid foundation of aggressive, yet very skilled played old school Thrash (with a couple of vintage SLAYER elements here and there, especially in the soloing) combined with a brutal, yet very convincing Death Metal voice. No stupid dog barking, but deep growling with the right feel for it. So, with all that in mind POSSESSED could be the closest comparision (of the aforementioned) of course, yet it still doesn’t describe them properly enough. Even though the ingredients are all wellknown in their songwriting, IMPETUOUS RAGE somehow already managed to create a kind of uniqueness, which is extremely refreshing and keeps you playing the demo over and over again. You will easily notice that when you compare their version of the BLACK SABBATH tune to the one of INFAMY (which was featured on the "Hell Rules" compilation some years ago)… The IMPETUOUS RAGE version simply turned out a lot more impressive (and I am a die hard fan of INFAMY)! So, considering all this it didn’t really surprise me that Genocide Productions already signed the band… The debut full length "Inverted Redemption" is scheduled for an early 2007 release, so watch out for that! If you would like to check them out before, contact the band as ask for the price of the demo (which was also released as a tape version, limited to 100 copies, but I suppose they’re all long gone already). www.impetuousrage.cjb.net, www.myspace.com/impetuousrage666, impetuous666rage@yahoo.com.br