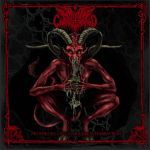 This Mexican band formed in 2018 and now released their debut album. The music is a mixture of Black and Death Metal, which sounds not far away from bands like ARCHGOAT or PROFANATICA with some references to DEICIDE and INCANTATION. The vocals are the low gruntled voices and the riffs are usually fast almost grinding speed with the drumming following. It also has that flavor of the evil and fast Death Metal from Brazil, but the lyrics and some auras are definitely in the static ways. Although the drums are from a real human, I think they abused a bit from some form of digital manipulation thus making it sometimes sound very similar. In some songs the vocal duties are shared giving it a more of an early CARCASS atmosphere. The simple riffs are casually a strong point as they keep it simple and direct, and that might also be something that will drive some people away, but then the main inspiration for this type of bands lies within the early purveyors of satanic extreme music, and at that time it was more about the intensity rather that the musical finesse. This is the type of release that is raw, crude, direct and simple, yet it has a charm of its own. Yes, this could have been recorded decades ago, Give it a try if you are into old skull static Metal! www.facebook.com/impiouscommunion, www.facebook.com/ibdc666