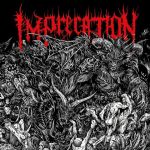 The middle of the 90s was a big Repulse Records period for my local record store. I can’t remember who had the distribution of the label in Denmark back then, but damn they got the albums into the stores. All of the obscure gems that aren’t available for reasonable money nowadays anymore were stacked around here, so they were quite cheap to purchase some years later. I can’t remember when I picked up ”Theurgia Goetia Summa” and for what price, though I can remember I was immediately hooked to the American’s wicked dark and deep summon of the netherworld. I hadn’t quite listened to Death Metal like this at this time, there were of course INCANTATION, though IMPRECATION took it quite further, darker and more evil. After discovering the demo compilation I was eagerly awaiting new material from the band, though I never got around to any, before they disbanded in the late 90s. Though then they all of a sudden re-appeared around 2010 with the ”Sigil Of Lucifer” EP and damn, again I was blown away, the same wicked and eerie heavy doomy Death Metal that I had grown to like. I was even more pleased in 2013 when IMPRECATION’s first full length album ”Satanae Tenebrae Infinita” was released by Dark Descent Records, the same label that now is responsible for the Texan’s second full length assault. ”Damnatio Ad Bestias” is a fist in the face, best IMPRECATION style, heavy and intense dark Death Metal with a doomsday-like impact on all senses. Doomy and worldeating in one place, and then blazing away with blastbeats and fastpaced riffs, all weighed in intelligently, the songwriting is clever and balanced, with a full force impact and quite intense! And the few places the keyboards are used, the overall impending doom atmosphere hits a vortex and drags us all down into the abyss. IMPRECATION might not be the fastest releasing band in the world, but when they offer a new release, it for sure is a masterpiece of evil and dark brutality, a feast of uncontrolled mysterious darkness leading down to the nether regions of what we know and still haven’t figured out. This new album isn’t off that standard, a very strong and punishing effort which I already have spun an insanely amount of times, which might explain my current condition. Join us in the triumph of death: www.facebook.com/imprecation-194725213915960, www.darkdescentrecords.com