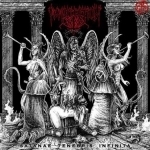 With an inundation of feeble new old school Death Metal bands, it’s always great to have a lost force from the past roar back from the grave and stomp them under-heel. IMPRECATION released the cult-classic CD "Theurgia Goetia Summa" in 1995, which was a compilation of early recordings, and then disbanded in ’98. Members from that band went on to form the Black Metal acts ADUMUS and BAHIMIRON (among others) but IMPRECATION were always the strongest of these projects, in my opinion. These guys are not unlike early VITAL REMAINS – that is, deep-as-fuck guitars shifting from chugging, crypt-lurking riffs into altar-smashing blasts of Death Metal morbidity. Also like VITAL REMAINS, IMPRECATION utilize subtle synths here and there to enhance a ritualistic vibe. However, I prefer IMPRECATION to their Rhode Island counterparts for two reasons – 1) these Texans don’t feel the need to repeat a 3 minute song 3 times to be effective, and 2) IMPRECATION’s guitar solos are of the mangling Rick Rozz variety rather than the more ‘pretty’ Yngwie style. An album this convincing may very well edge into my Death Metal top 5 of 2013. All further information at: www.facebook.com/pages/imprecation/194725213915960, www.darkdescentrecords.com