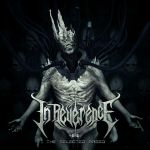 Stockholm, Sweden’s IN REVERENCE, after seven active years, have released their first full-length entitled "The Selected Breed". A prior demo and EP each have helped provide a direction for this band to lead to. Filip Danielsson (vocals), Pedram Khatibi Shahidi (guitars) and Oscar Krumlinde (drums) have, through five years from their last release, molded themselves into a force to be reckoned with. The opener ‘Jahiliah’ begins with an acoustic guitar but methodically evolves into a Death Metal piledriver. Growling vocals, synchronic drums and sinister guitars introduce us to what to expect the rest of the album. Lightning-speed ‘Gods Of Dehumanization’ attack us without warning, before gelling into a miasma of bludgeoning rhythms and furious emotion. The good thing about IN REVERENCE is that they don’t sit still. Each track has its own personality, providing just enough difference to keep us interested, while not losing its dementia-filled, down and dirty metal consistency. ‘Prometheus’ scalds us one moment, then gently oozes into our veins with a steady mid-tempo ending before crushing us with ‘The Selected Breed’, an angst ridden, screeching beast of a song. ‘The Sixth Bloodletting’ is another ear-splitting, ever-changing track shifting from thunderous brutality to levelled-off, yet pounding, triumphant majesty. ‘Anthropogeny’ gallops forward in its charge making you want to just get up off your sorry ass and break something. The seventh track ‘Red Waves’ continues the frenzy, as ‘Gift Of Disintegration’ casually builds and builds to an epic crescendo. Then, after around 30 minutes, the pace slows with the final track ‘Life Rejuvenate’, an acoustic, atmospheric tune which lays this album gently to rest. You shouldn’t expect any breaking ground with "The Selected Breed", but you won’t want to either. It’s exactly what’s needed after a long day of work. Unwind, let your hair down, and go nuts. This album will make your ears bleed. For more information, check out www.facebook.com/inreverence, www.non-serviam-records.com