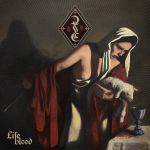 Once in a while a band releases an album that will shatter the earth. Poland’s IN TWILIGHT’S EMBRACE formed in 2003, started as a melodic Death Metal band with some Deathcore elements, slowly evolved into a more Death Metal style, not far away from the Swedish heroes, then released a few albums and slowly evolved with every album, until this new and sixth album is released. And this is one of those events that makes me have hope in extreme Metal as a form of art, yet never escaping the primordial essence of extreme Metal. Now, almost 20 years after their formation, with a very stable line-up, the band plays some of the most vicious Death / Black Metal ever with an almost symphonic sound to it, with a very present sense of melody, that at times recalls a band like DAWN, sometimes PHLEBOTOMIZED and sometimes SODOM, with an almost epic, cinematic aura. There is always a dark melody in their sound and those guitars are so massive. Yes, I can sense some tiny bits of Post Rock here and there, but it’s actually enhancing their sound, and those killer vocals that are so agonising yet so powerful. The composition and execution skills are very high. They are lords of their sound as a song like ‘Sedation To Sedition’ shows, with their very morbid Rock sound in the assault of extreme Metal of obscurity and death taking their lives. Can I hear some “Reinkaos” here? Yes, in a more extreme way. Nowadays it’s quite hard, but this sends chills to my (old) spine and makes it a strong contender for album of the year. For all additional information check out: www.facebook.com/intwilightsembrace, www.facebook.com/malignantvoicesproductions, www.facebook.com/terraturpossessions