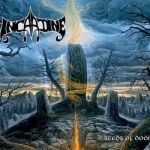 Another trip in the Swedish underground history gets granted by Vic Records. INCARDINE is another outfit, perished in the mass of bands and releases in the early 90s. This doesn’t mean that they were lacking of talent or so, as Fredrik Folkare later joined UNLEASHED and FIRESPAWN. Vic now releases the compilation of their complete material. After two demos, the band recorded their full length “Seeds Of Doom” in 1993 which was recorded in a local studio and mixed by Peter Tägtgren before their label went bankrupt and they disbanded and disappeared. The material never saw the light of day until it was first released by Bone Records. And Vic decided to give the compilation another run, which is good as ‘Burst Into Fire’ is a damn good opener. The guys had already a pretty matured style playing a mixture of Death / Thrash Metal, a bit similar to SEANCE or maybe MERCILESS but less thrashy and more melodic. The track offers good and sharp riffing, good drumming, audible bass-lines and a pretty good groove without lacking of Thrash and the grunted vocals really fit perfectly. It’s still a wonder how many bands were active in the underground back in the days without making their way. Good that the original tapes appeared again and that Fredrik made them available again. ‘Physical Repugnance’ continues the way and is aother damn good track, packed with good riffing, cool Heavy Metal tunes and still harsh Thrash Metal. All the 14 tracks are damn good as they show a wide range of influences combined to a killer and very unique package. Imagine a mixture of KREATOR, MERCILESS, ATHEIST, SEANCE, DESULTORY and DEICIDE mixed with a good doze of Swedish Death Metal à la UNLEASHED and that’s what INCARDINE were all about. I missed them out as well, but am pretty happy that Vic once again offers a blast from the past (Greetz Roel), which is very enjoyable and offers good music with this special 90s magic you can’t re-crate nowadays. And Vic Records also offers the two demos “Moment Of Connection” (1992) and “Demo 2-92” as well on this release, so old school lunatics like me should order this diverting trip back into the 90s as the material really is worth to be discovered. For more info, check the following source: www.facebook.com/vic-records-321130546025