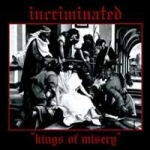 INCRIMINATED
Kings Of Misery
(From Beyond Productions / Displeased Records)
38:20min

Finnish INCRIMINATED finally come up with their second full length album after numerous split releases (the band keeps releasing their stuff since 1998). As I own the split with BLOODHAMMER I was really looking forward to this one. On the split, INCRIMINATED played a very raw and sick old school Black / Death style influenced by HELLHAMMER / CELTIC FROST and AUTOPSY (mainly due to the perverted vocal delivery) with some old Hardcore vibes like DISCHARGE – not original at all but definitely convincing and played with the needed spirit and aggression! Unfortunately this is not the case on this very record: the ingredients are still the same but the outcome is quite boring, uninspired and lame – assed. The riffs sound too Punk – influenced by far and lack the vicious atmosphere of their previous material in every respect. Some parts even sound hilarious… some rockarolla parts anybody? Harald Mentor’s groans and screams are also far from being convincing. I can only ask: what went wrong, guys? Bored by your own muzak? At least it sounds so. Stretching the last track over 15 minutes and adding some delay – effects towards the end doesn’t help at all… or are these the “very sick and dark experimentations with atmospheres…”? Sorry guys but this effort is definitely too tame and weak. Lock yourselves in the rehearsal room and try to find what obviously went lost. As a conclusion I would recommend others to check out INCRIMINATED’s earlier material (if there is interest) and those acquainted with the band to listen to this one before purchasing it blindly. Next one, please. Band contact: audioterror@jippii.fi