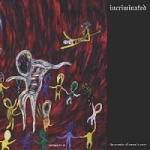 INCRIMINATED
Promise Of Worse To Come
(From Beyond Productions / Displeased Records)
36:07min

After having read Ulrich’s already not too flattering review on “Kings Of Misery” it was pretty obvious to me that Finnland’s INCRIMINATED had become even worse on their newest full length! This is actually by far the biggest piece of shit I’ve heard in a long time! From the stupid, rather psychotically painted coverart, to the non existing musical skills, let alone the songwriting (?) everything about this release is a waste of time and money. And addressing this to fans of primitive old school Death and Black Metal in the vein of the classic masters VENOM, SLAUGHTER, HELLHAMMER, DEATHSTRIKE and early ONSLAUGHT (to name but a few) is not only completely misleading, but a total height of cheek! To me there’s still a big difference in playing primitive music and not being able to handle an instrument at all! The band’s abilities to come up with exciting songs is totally non existing and all they deliver is annoying boredom, played very miserable. Back in the 80s critics still accused HELLHAMMER of being incompetent and sounding shitty, but no matter if you like(d) them or not, they at least had songs (!) to offer that were totally unique, delivered an apocalyptic atmosphere and stood the test of time for one reason or another. INCRIMINATED fail in all that completely and therefore it was a real torture to listen to this till the very end. No wonder that the entire music industry is complaining about lack of sales and CD-Rs / MP3s if crap like “Promise Of Worse To Come” continues to flood the market. At least they have chosen the right title for this… Avoid at all costs! Band contact: audioterror@jippii.fi