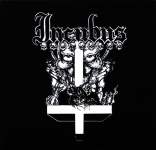 There are a few demos out there that already are considered classic and left a brutal mark in the extreme music scene. Names like NECROVORE, VADER, NECROPHOBIC, MORBID ANGEL and many more will surely come to mind. Oh, did I mention MORBID ANGEL? Well, then there is no surprise this demo with musicians that once played in that evil Florida band is to surface among those names, being one of those Sterling von Scarborough (doing here a great work in both vocals and bass, who sadly passed away in 2006 due to suicide) and on the drums none other than mighty Mike Browning (who later did drums and vocals for NOCTURNUS as I suppose you all know) and a very good guitar player by the name Gino Marino (who also later played in NOCTURNUS and AFTER DEATH). Only 3 songs that have been bootlegged infinite times and re-released countless more. And you see there is a good reason for that. These 3 songs of crude, maybe primitive, but still well played Death / Thrash / Black Metal were ahead of their time. Yes, there is a strong connection with what MORBID ANGEL was doing in the early stages, and that recalls bands like POSSESSED, SLAYER, SODOM, VENOM. But instead of doing compositions in a more straight forward style, they were some of the pioneers in actually doing very weird rhythms, in a semi-technical way (I am sure they were the result of pure coincidence). But it was probably also a sign in those twisted minds to create something this wicked. Add to that very evil, satanic and occult lyrics, so in 1987 this INCUBUS (which by the way started in Georgia, but later on reformed in Florida) was amongst the most evil and occult bands the earth ever spawned. And to be honest, this demo is also some of the best recordings to come in this format, no matter how raw and unpolished it might be compared to nowadays works. This Vic Records version comes out as one of the best versions of this demo I have seen (don’t forget the amazing Proselytism Records edition, Julian! – Frank). If for any reason this piece of extreme Metal history is not in your collection, it is time to fix that mistake. www.vicrecords.com