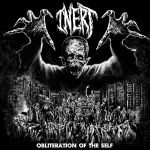 INERT
Obliteration Of The Self
(Neckbreaker Records)
13:20min

INERT is a two-men project founded in mid 2015 with its roots in Spain. Guitarist Xavier then relocated to Sweden and he and Gustavo, responsible for vocals and drums anyway decided to continue their project and have started writing songs for their first EP entitled “Obliteration Of The Self”. The opening track ‘Fake Servant Of God’ is already an absolute fast wrecking ball. Deep growls and screams, powerful drumming and groovy low-tuned guitars really deliver all trademarks of neckbreaking Death Metal. Their style is a real old school bastard crossing the borders between Scandinavian Death Metal and some elements of US styled Death Metal. ‘Obliteration Of The Self’ is another monster track, where the guys slow-down a bit and let the groove take control of the track, before turning it into a fast and aggressive monster again. Especially here the US influences appears a bit more obvious. ‘Son Of Certain Death’ spreads some old school feelings of bands like SEANCE and older DESULTORY. With its speed and aggressive tunes it is a good mixture between Death and Thrash Metal. Even though, “Obliteration Of The Self” was self-released by the band before, the overall production and layout is nearly perfect and far better than a lot other productions nowadays. Neckbreaker Records saw the immense quality of the material and will re-release this EP with a bonus track entitled ‘Trading Death’, which was recorded only for the re-release. This track also shows the immense potential of the two guys and is another good proof that the Death Metal underground is more active than ever. The 7" vinyl version is limited to 500 copies while the CD and tape versions (made by the band and Caco-Daemon Records) are already sold out. More information you will find here: www.facebook.com/inertband, http://neckbreakerrecords.bigcartel.com, www.facebook.com/neckbreakerrecs