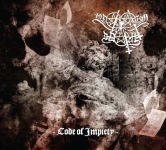 Poland has spawned some huge names in Death Metal history. I don’t think I need to mention any of them, right? Well, let me mention one more: INFATUATION OF DEATH. "Code Of Impiety" is a total beast of an album. I really don’t know how many times I’ve spinned this album so far. It is one of the best brutal Death Metal albums I’ve heard in a long time. And maybe one of the best releases to come from Poland in too. Now, on to the bad news. The band broke up a few years before "Code Of Impiety" was released. So, the album has been released posthumously by Defense Records in collaboration with Mythrone Promotion. And we all have to thank these two labels for such a bold move. This album was meant to be heard and played at annoyingly loud volumes! Now, the production here is stellar and massive. Although it may sound too modern for some, I think it is a perfect fit for their brand of Death Metal. Crushing guitars, pounding bass and razor sharp drums. Add the deep growling vocals and there you have it: a total evil and dense atmosphere. The mix is dense but well balanced and the master is a little too compressed. But these nuances really don’t matter much, since the songs are way too good and even if they were recorded at rehearsal with a tape 4 tracker, they’d still be amazing! The influences are pretty obvious ie. early DEICIDE, early MORBID ANGEL, early VADER and the likes. But INFATUATION OF DEATH has taken those influences and crafted an album that destroys everything in its path. It does feel familiar, but it is not a rip-off or a copy of the aforementioned bands. I see it as a homage or worship. And it’s simply brilliant! I’ll stop now. Because what you got to is go out there and get this album. Go get it now! NOW! Since the band split up, they have no official page. But you can get their album and some merch at their label here: www.defensemerch.com