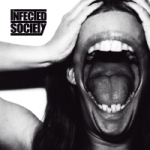 Despite, or in spite of the old saying don’t judge a book by its cover, INFECTED SOCIETY almost faced such judgment. The cover art to their EP looks like something from DESTRUCTION’s forgotten 1998 album, “The Least Successful Human Cannonball”, only cheaper and more digital looking. But, thankfully the music makes up for it. What you’ll get here is Grindcore, influenced by the usual suspects (NAPALM DEATH, etc.) in addition to a strong Thrash Metal influence. Of the four original tracks on this EP (two are cover tunes) my favorite would have to be the third one, ‘Together The End’. It isn’t too fast, but boy is it ever heavy: simple, headbanging riffs, angry vocals, and a good beat. Things round to a close with a cover of NAPALM DEATH’s ‘Necessary Evil’ and PANTERA’s ‘Sandblasted Skin’. That a Grind band should cover a PANTERA tune strikes me as odd, but such is the modern era in which we live. www.infectedsociety.bandcamp.com, www.kaotoxin.com