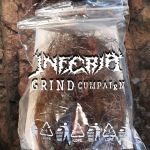 INFERIA and I have a history together that goes back to 1993, when the Finnish band released their debut EP “Spawned At The Dawn”. “Indecent & Obscene” by DISMEMBER and “Pure Holocaust” by IMMORTAL were in the same mailorder package by the way and ever since this my musical taste was moving in this triangle of Death Metal, Black Metal and Grindcore. As much as I liked the EP, the first full-length by INFERIA, “Masterpiece”, was a disappointment due to the horrible sound. Same goes for the follow-up “Parental Advisory”. That is why I did not follow the band’s path any further and was all the more amazed that they still exist. In fact the band released a few albums, making “Grind Cumpaign” full-length number seven. And the album is so good that I am wondering how the other albums I have ignored until now sound like. “Grind Cumpaign” offers the listener a solid slab of Grindcore. Deep guttural vocals, British (early CARCASS, early NAPALM DEATH) influenced guitar work and, of course, blast beats all night long. Luckily the band is abstaining from any dull and annoying movie samples, just a short intro and then it is all about the music. Any searches for any musical extraneous influences are also running into the void. That may sound boring to some, but I really enjoy it. Because INFERIA are presenting nothing but the essence of Grindcore. A real feast for every Grindcore purist. More information can be found here www.facebook.com/inferia1989 or here www.facebook.com/greatdanerecords