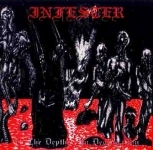 This album kills, there’s nothing left to say. I could, quite simply, end here this review, but it is right to go into detail, in order to explain why this underrated and obscure album from 1994 has become a little collector’s item throughout the years. Originally released by the American label Moribund Records, it has been re-issued seven times in various formats (tape, digital, CD, vinyl and CD-R) over the past six years. Responsible for the last reissue is the French label Krucyator Productions that has just re-released “To The Depths, In Degradation” in a double CD edition, containing the “Darkness Unveiled” demo from 1992 as bonus material. This is good news indeed, because about ten years ago this was a very hard-to-find item and it costed a fortune: more than 100 Euros for the original CD version. So, thanks to Krucyator Productions for making it available again. Musically, INFESTER is a prime example of how a hybrid genre can work perfectly well in extreme Metal. INFESTER plays a mixture of old school Death Metal (early INCANTATION and MORTICIAN), raw Black / Death Metal (PROFANATICA, BLASPHEMY and FALLEN CHRIST), primitive Death / Doom Metal (GOATLORD and NECRO SCHIZMA) and Grind / Noise (MEAT SHITS). The sound production is raw and obscure with a strong pseudo-rehearsal feel; it’s pretty reminiscent of what INCANTATION did in the “Tribute To The Goat” live studio recording session. The songwriting is an intricated alternation of slow, gloomy and suffocating parts with fast accelerations of darkened old school Death Metal and grinding chaos. The riffing style is technical and enriched by some killer melodies, tremolos and leads; all defiled by a filthy distortion and a deep guitar tone. The overall result is dynamic and brutal, thanks also to a very aggressive, crazy and blasting drumming style. All three members were involved in a couple of MEAT SHITS albums and it explains why the grinding blastbeat assaults are so damn killer. Besides the legendary MEAT SHITS, the drummer is a particularly active name in the American underground, having played with bands such as: DRAWN AND QUARTERED, EVOKEN, FUNEBRARUM, ABAZAGORATH, KROHM and RITUAL CHAMBER (the latter two are his current solo projects). Two other commonalities with MEAT SHITS are the use of sinister keyboards, that are able to create an horrific atmosphere, and some very disturbing, guttural, gurgling and inhuman growlings, pretty similar to those of Lord Worm from early CRYPTOPSY and Sylvain Houde from early KATAKLYSM. The lyrics deal with gore, sex, sadism and occult. INFESTER is also known for an ambigous band picture that portrays the three members in front of a banner with a swastyka embedded in a pentacle. Ok, this could be a problem for many people, but, as always, I suggest you to judge music objectively, without being influenced by political or religious beliefs. In this case you’ll discover a little gem of morbid, depraved and putrid Black / Death / Grind sickness: recommended! For more info: www.facebook.com/infester, www.krucyatorproductions.com