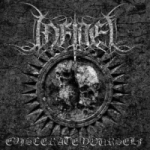 Polish outfit INFIDEL follow up their 2009 debut album “Ejaculating Chaos” with a 5 track MCD entitled “Eviscerate Yourself” and deliver a vicious and pretty individual piece of Death Metal fuelled Black Metal or blackened Death Metal due to combining mainly fast paced storming guitar riffs and chord bombardments in the vein of MARDUK or country mates INFERNAL WAR with merciless drumming and a dynamic vocal approach consisting of barbaric growls (a bit sounding like Jeff Gruslin / ex – VITAL REMAINS) as well as the usual snarls. Judging from the band’s onstage appearance and corpsepaint, INFIDEL are Black Metal to the bone in terms of ideology and visuals and the overall hateful and possessed mood emanating from this EP underlines that with a proper sinister and blasphemous atmosphere. Musically, INFIDEL are the most appealing to me when focusing on the Death Metal elements in their sound (‘Chaos Blood Blasphemy’) even though they hardly ever leave Black Metal paths especially in the guitar department, but the vocals definitely do the trick and overshadow that traditional and unspectacular chord progressions are the main fundament of their sound. Unfortunately, the snare sound is somewhat tinny (the drum roll opening of closing track ‘The Plague’ sounds outright ridiculous to be honest) and the occasional leads are not that mind blowing, either, though they nourish my impression that INFIDEL are at least very eager to not just sound like another band but have an eye for creating something totally their own. Everything about this release sounds somewhat half-baked to me, but surely not bad enough to feel forced to warn you about it. Bottom line is: Rom wasn’t built in a day, perfect Black / Death neither. Check a song here. Band site: www.infidel.pl. For ordering visit: www.oldtemple.com