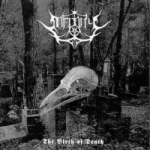 One should not waste much time talking about the Swedish label’s name, fact is that there are no Nazis behind it and as far as I’m concerned this rather tasteless, political un-correct moniker does not bother me much. The last thing this album by Dutch Black Metallers INFINITY would deserve would be getting shunned for the label’s badly selected name. “The Birth Of Death”, the band’s second effort after the debut in 2003 “Nostalgia For The Dark Age” is simply awesome and though completely unoriginal among the best Black Metal albums I have heard lately. Fast old school intensity, dark spirit and driving aggression alternate with moody slower sections, epic acoustic guitar interruptions and result in an absorbing journey into the glorious Black Metal past of the early to mid 90s. A reason for INFINITY’s close proximity to the ancient ideals and musical elements of that time might be the drummer’s participation in FUNERAL WINDS, who represent the essence of old school Black Metal as well, but who knows… On “The Birth Of Death” the grim vocals, the uncompromising raw yet powerful production, the versatile drumming, the skilful arranging of speed and atmosphere coalesce in a true masterpiece of Black Metal offering everything a dedicated Black Metal fan loves about this type of music. This album is simply fantastic and beside the new ARMAGEDDA album “Ond Spiritism” the one I’d personally recommend people looking for new stuff in this crowded genre. Get it!!! Links of interest: www.geocities.com/infinity_blackmetal and thr.cjb.net