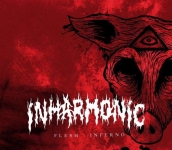 Facts, facts, facts: INHARMONIC are from Joensuu in North Karelia, Finland. The five-piece rose from the ashes of a band called LETHARGY in 2007 and up to now released two self-financed EPs. “Ugly” saw the light of day in 2011 and now it’s a “Flesh Inferno” haunting your house. So much for the facts. What do these Finns have to offer to those who are craving for Death Metal? Well, nothing spectacular on the one hand. On the other hand, the five songs here might not be spectacular, yet they’re pretty delightful for those into brutal Death with a slight, not too present technical edge. And INHARMONIC do damn well in what they do. A little CANNIBAL CORPSE here, a little MONSTROSITY there, seasoned with a few Thrash Metal elements – the bloody meal tastes fine! Be it the opening title track with the grooving introduction, the furious ‘Pigwaste’ or ‘Worm Sanctum’ with its rather harmonic guitar leads – none of the five songs is a barrel burst. Instead, “Flesh Inferno” turns out to be a homogeneous massacre with style. As I already said: INHARMONIC ain’t spectacular, but those addressed should give them a chance at www.inharmonicdeathmetal.com or www.facebook.com/inharmonicband