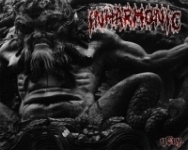 This is just awesome. I have no idea why – in the recent years, Death Metal has become so popular in Finland again since the 90s but one thing is certainly sure: I simply love the current state of the Finnish Death Metal scene – bands like SWALLOWED, KRYPTS, STENCH OF DECAY, ASCENDED, GOREPHILIA, DESOLATE SHRINE, FLESHRED, CRYPTBORN and a few other names, keeping the rotten flag high for some murky and brutal sounds of Death Metal. Also INHARMONIC can now be added to the very same pile of Finnish Death Metal bands that most probably will turn some ears toward their direction for a bit longer time than just a passing, pleasurable moment. Unlike many other upcoming Finnish leagues of death and decay – counting on a downtuned, stripped and grave-reeking Death Metal sound, INHARMONIC have chosen a path that leads its listeners toward the similar sounds that make us to think of bands like DEICIDE and LUCIFERION, in which the main emphasis is clearly laid upon more technical and tricky aspects of Death Metal. The obvious DEICIDE worship is undoubtedly an integral part of these 5 relatively young Finns’ sound – and damn, they do their job extremely well when it comes to similar type of technical, strongly riff-based Death Metal which DEICIDE and LUCIFERION have both become known for. All the 3 songs on INHARMONIC’s “Ugly” demo prove more than clearly the band’s whole fire arsenal to churn out a really monster and crushing sounding Death Metal, raising INHARMONIC like a rocket on the top elite of the current Finnish Death Metal scene just by this one excellent demo. These gifted musicians in INHARMONIC have really taken their time to rehearse the songs into a rewarding top-notch form, sort of just to make sure a few jaws could be left completely open once the demo has been inserted into a CD-player. In order to maximize the enjoyment, also the production does not leave much to be complained about; the clear and heavy production supports perfectly INHARMONIC’s sinister plan to come closer to – step by step, the world conquering. Now get prepared to meet thy new masters – and remember who told you first about this surprisingly talented Finnish Death Metal bunch. www.myspace.com/inharmonicbalance