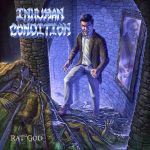 Not only the band’s name and logo have a strong MASSACRE influence. Named after an EP by MASSACRE from 1992 new formed INUMAN CONDITION consists of Terry Butler, Jeramie Kling and Taylor Nordberg and all three have been part of the Death Metal legend from Florida’s swamps (by the way, MASSACRE have signed to Nuclear Blast and just released the single ‘The Innsmouth Strain’ for their upcoming album “Resurgence”). Since Kling and Nordberg left MASSACRE just one year ago it is no surprise that the music sounds very much like “Back From Beyond”, the comeback album by MASSACRE from 2014. That album was, as usually when a band releases new material with a delay of 18 years, a bit controversial. Some liked it, some not. But back to INHUMAN CONDITION and their debut “Rat°God”. It is a typical example of not too technical Florida Death Metal. Everything is kept simple, mid-tempo with swings in the direction quickly and slowly. Not too brutal vocals, some guitar soloing here and there, nothing spectacular, but well done. As bonus track serves a live version of the album track ‘Killing Pace’ and I guess that is just for the purpose of expanding the running time a bit. Above all stands the name OBITUARY and having in mind that the last album dates back to 2017 “Rat°God” is great for filling the time until a new one. Go and get your dose from the swamp here www.facebook.com/inhumanconditionband or here www.facebook.com/blackserpentrecordstore