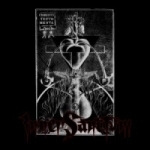 More than 18 years have passed by since the debut album of this legendary band from Uruguay saw its day of light. I guess I wasn’t the only one out there who considered this outfit, formed in 1989 by the charismatic guitarist and band leader Heber W. Hammer, to be dead and vanished from the scene. But it’s great to see that "Christi Testamenta" is the mighty return of this great squad and proves that I was completely wrong with my speculation. Only two members remained from the line-up which recorded the fantastic debut album "Frozen Souls" in 1994: Heber W. Hammer himself and drummer Alvaro Garcia who lives in Italy now. These two guys got some prominent reinforcements in recording the follow-up twelve tracker. One is ex – PENTAGRAM & CRIMINAL axeman / vocalist Anton Reisenegger as singer and on bass Francisco Martin (SACRAMENTO, THE GARDNERZ) joined the rank. All I can say is that "Christi Testamenta" is a good, furious and very well crafted follow-up release which delivers a heavy dose of Death Metal with a nice thrashing edge because of the riffing. The solid songwritting qualities and the skillful arranged tunes make it a pleasure to listen to the entire output right from the start. The songs are mostly mid paced with some slight variation in the speed department. Maybe this can be critisized as you miss some real outbursts. But the band tries to compensate this fact with a lot of details and variety within the tracks. And I think they did a good job. You get a solid wall of riffs and INNER SANCTVM doesn’t despise a melodic edge as well which makes the stuff even more interesting. You can hear that the music was created by experienced musicians who know what they want. The disc doesn’t sound too much old school as you might think or expect and has a quite modern vibe. I don’t mean it in a negative way as the material is powerful and offers some fresh riffs / ideas. You can also hear a decent CELTIC FROST touch within the songs and it’s also then no big surprise that the band covers the Swiss gods (‘Return To The Eve’). If you are interested in the return of one of South America’s cult acts then you can check out samples and order details at www.i-voidhanger.com.