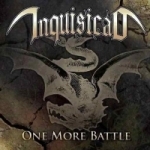 This 12 song album comes as a real good surprise I have to say right away! This Brazilian bunch started back in 1983 but they did go through several line up changes over their career and only managed to record some demo tapes… until mid 2006 when they finally entered a studio to capture the material they had been playing for years and now Marquee have released it. INQUISICAO can be described as a sort of RAINBOW on amphetamines for a good part and Sidney Sohn’s keyboards bring a certain 70s texture to the songs that is really enjoyable. But the real star here is vocalist Silvio Mazzei who turns out to be an excellent Hard Rock / Heavy Metal singer – I mean you can’t help but find a song like ‘Insane Warrior’ totally killer. Other than a certain resemblance to RAINBOW, there’s hints of DEEP PURPLE, SCORPIONS (‘Long Day Anxiety’) and other Hard Rock monsters, not bad huh? The riffing is also very strong and is backed up by a rather impressive rhythm section. The only letdown is ‘Survive’ which had its verses based on a crappy staccato riff which simply goes nowhere – as usual. Let’s hope it was only an accident and INQUISICAO won’t do this again if they plan to do more albums! Apart from this "accident" this is really a highly recommended album if you like energetic / professional 70s / 80s Hard Rock / Heavy Metal! Fuck yeah! www.inquisicao.com.br, www.marquee.com.br