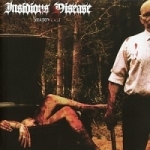 INSIDIOUS DISEASE is an “all star” band including members and ex-members from MORGOTH, DIMMU BORGIR, OLD MAN’S CHILD, NAPALM DEATH and MALEVOLENT CREATION to name a few. Oddly enough, this release has been labeled “Blackened Death Metal”. Personally, I think the “blackened” part is nowhere to be found. This is a solid Death Metal release, with melodic passages, heavily influenced by Florida’s and Sweden’s mid 90s style. They also incorporate blast beats, but luckily, they are not overused. Now onto the recording itself. Production wise, this is really good. Every instrument is powerful, yet clean enough not to get lost in the mix. I just don’t like the mastering. It seems nowadays the common practice is to compress the sound as much as possible and bring the volume all the way up (“Death Magnetic” anyone?). Besides that, the album flows with enough variation within each song. Every musician involved is more than capable of delivering some crushing performances and playing skills. The song structures are basic, yet effective. Marc Grewe still has a great set of vocals that fit the music perfectly! Now, there is a countless number of bands bringing back what today is known as “old school” Metal, be it Death, Thrash, Black etc. But I was expecting a lot more from “Shadowcast”, considering the background of all the members of INSIDIOUS DISEASE. The album is not bad by any means, but it is not an instant classic either. And to top it off, the limited edition includes a really cool cover version of DEATH’s ‘Leprosy’. An enjoyable album with crushing production and catchy songs, but nothing spectacular. Recommended for any respectable Death Metal fan. Check them out at: www.myspace.com/insidiousdisease, www.centurymedia.com