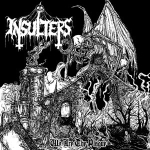 INSULTERS
We Are The Plague
(Unholy Prophecies)
32:26min

Think of anything you’ve ever drawn in your life; it could be some kind of fan art for SLAYER or MORBID ANGEL, a portrait for a teenage girlfriend or perhaps even a botched band logo. The point is, you had to learn, at some point, that in order to create the illusion of form or depth on a two-dimensional plane, you have to smudge a few lines. INSULTERS applies this very principle to their reverb-heavy, layered production on "We Are The Plague". What I find so refreshing about this approach is its ability to dodge the meticulous taxonomy of extreme metal – a genre that is already so heavily fractured – and instead focus on the things that really matter, like, perhaps, the message and aesthetic of the music for starters. INSULTERS, much like some 2013 releases, notably, from POWER TRIP, take a fully post-modern approach at reflexivity. Perhaps what they say is true and we are simply inundated with information, styles and approaches that it’s nearly impossible to create new music in a vacuum. They could be right, but I think this idea is often one that yields its own approach. The production on "We Are The Plague" is beyond layered; the echoed vocals often multiplied during the chorus, the density of the bass and distortion of the guitars manages to escape classification. Is it Death Metal? Maybe. But that’s missing the point. The attitude is multiplied, summoning elements of Hardcore and Thrash into a fractal-esque orgy of destruction. It is a paradoxical expression of the "wall of sound" except that certain elements make it razor sharp as the reverb strangely allows for blending without full disintegration.This album builds on earlier releases, "Black Vomit" and "Spit On The Crucifix", in the sense that is has added more depth and refined the vocals and the Punk elements have grown up into much thrashier manifestations. ‘Dynamite The Mosque’ is an excellent example of this; the somewhat dissonant buzz that can be heard throughout the entire track is enough to remind of you of the good times where you would have been listening to a worn out cassette in some cold garage somewhere, except there’s more to uncover. It’s a privilege in this digital age to hear these layers. INSULTERS manages to reconcile the two eras seamlessly as a band who’s keeping what’s good about Death Metal and refining it, blending it and smudging it to bring new life to the sound and bring it back to life. www.facebook.com/pages/insulters/118124661718106, http://insulters.bandcamp.com, www.unholyprophecies.com