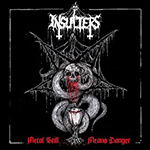 This band’s second full-length is called "Metal Still Means Danger", a title I can relate to, seeing the watering down and deviations that took place these past two decades. INSULTERS from Barcelona, Spain, play a kind of aggressive, straight forward, somewhat simplistic yet well played Thrash Punk with blackish vocals. The Punk parts are undeniable (hear those riffs in ‘Highway Of Death’, for example), the sound is adequately raw and harsh, and even though there isn’t much in the way of innovation, I enjoyed this unpretentious and to the point album. Sometimes bringing to mind bands like MIDNIGHT or even TOXIC HOLOCAUST, there is no denying the Metallic anger that seethes out from this. With titles like ‘Bang Your Fucking Skull’, ‘Forged In Hell’s Fire’ (both great songs) or indeed the title track, and with members with names like Nuclear Cummer or Bourbon Devastator, there is a definite taste of the urge to keep the flame alive… that has been burning since the primeval times of VENOM and CELTIC FROST. There is much to like if you are into the old dangerous Metal of those times of yore, whereas there is not one gramme of modern Metal to be found in these nine tracks of alcohol and blasphemy. The vocals are very direct and at times I wondered whether they might profit from a more dynamic approach (like BEWITCHED with their almost Rock’n’Roll vocal melodies) but I guess this fits their own style and it’s very effective to hear Blasphemic Vomitor vomiting out the chorus "Metal still means danger"! The drums are particularly well executed, courtesy of the same drummer from Death Metal act GRAVEYARD, providing a solid frame upon which the rest of this old school Thrash can develop. Grab some whisky and bang your heads while proceeding to www.facebook.com/insulters666, www.unholyprophecies.com