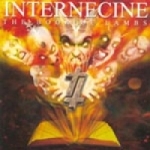 Jared Anderson is without a doubt one of the fastest rising musicians within the Death Metal genre lately. He basically came out of nowhere, ended up being recruited as the bass player for Erik Rutan’s impressive outfit HATE ETERNAL and then went on to temporarily replace Steve Tucker in MORBID ANGEL. As everybody should know by now, Anderson has become a fulltime member of MORBID ANGEL in the meantime (fronting the Florida legend on bass and vocals), but it seems he still has enough energy and time left to produce something on his own besides all those activities. Under the INTERNECINE moniker he recorded approx. half an hour of music (almost) completely on his own and the result turned out highly impressive! “The Book Of Lambs” is a furious Death Metal outburst on the highest musical level, not too far away from what HATE ETERNAL delivers. But that shouldn’t be such a big surprise considering the fact that three members of HATE ETERNAL were also involved in INTERNECINE. Even though Anderson wrote the entire material and is responsible for all guitars, bass and vocals, he got help from Tony Laureano (ex-ANGEL CORPSE, NILE) and HATE ETERNAL’s Derek Roddy, who both filled in on drums and Erik Rutan, who contributed a couple of guest solos and also produced the album. This is high speed brutality, performed by top notch musicians, powerful and devastating to the max, but always blessed with the necessary class that those guys got well known for. My personal fave on the record definitely is ‘… For Thee I Bleed’, with its razor sharp riffing that somehow reminds me on some band from the glorious Death / Thrash Metal past (unfortunately I couldn’t exactly recall which one it was… I’m obviously getting too old for this shit…). Even though I would definitely have preferred to see these killer songs getting released by HATE ETERNAL (or MORBID ANGEL) in order not to waste the obvious talent on yet another project, this is still an album worth adding to your collection.