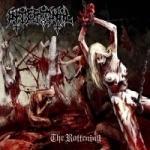 An increasing, countless number of new, old school sounding Death Metal bands have constantly been invading our households for some years already, making all of us to feel like they have always been lurking there somewhere, and just waiting for the right time to get our houses thoroughly mangled inside out. The Swedish slaughterhouse messiahs, INTESTINAL, are back in the murder spree once again. These blood-covered fellas have already got their debut studio outing (titled "Human Harvest") released on Polish Psycho Records in 2010 – and also the band’s follow-up album, "The Rottening", has now been put out by another Polish label called Hellthrasher Productions (which, by the way, is doing a killer job for releasing a host of old school Death Metal… my big fuckin’ sincere hails to them!). This eleven track opus – which contains a really grotesque album cover, also reminiscing about some early CANNIBAL CORPSE album cover artworks – leads listeners into the macabre and sickening world of torture chambers, flesh-eating psychopaths, etc. But then again, what else there honestly really could be to expected from a band that carries the name INTESTINAL – and the album name that has simply got the title "The Rottening". The 5 Swedes in charge of spreading the macabre tales all over the place on "The Rottening", really get their job done in a somewhat admirable way as far as the songs on this new release of theirs, are concerned. Musically expect nothing but dirty, mid-paced and down tuned old school Death Metal, done exactly the same vein how only the Swedes youngsters managed to do it the right way in the late 80s – and mainly in the Stockholm area to be more precise with all of you. Essentially the core sound of INTESTINAL could be linked quite easily to the same murky, crispy and limb-heavy Death Metal sound that some of their fellow country mates like CARNAGE, EXCRUCIATE, GOREMENT, CREMATORY and many others, had once adopted and so successfully used on their own releases for their own good. What INTESTINAL do on "The Rottening", it ain’t far-fetched to say the guys have stolen (or borrowed, make your own pick) their blood from the same corpses that once gave life to this famous Swedish old school Death Metal sound. "The Rottening" reeks of all those things that made so many of us to fall in love with the ‘T.S.O.S.D.M.’ phenomenon back in the day, when all cool things started happening in the land of kings and queens. You just gotta love this ancient Swedish brutality of Death Metal, don’t you? For more info, check them at: www.myspace.com/intestinalband, www.hellthrasher.com