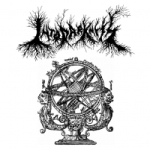 Damn, this is absolutely cool… those Italians deliver finest doom laden Metal of Death which is deeply rooted in the early 90s and should be very suitable for fans of ASPHYX, DERKETA, DREAM DEATH and the likes. Although I’m not a big fan of Doom Death this self-titled debut recording from INTO DARKNESS really got my attention. In my humble opinion most Doom Death Metal releases are rather mind-numbing and soporific but INTO DARKNESS are able to compose interesting and varied songs by adding several faster eruptions and mid-paced parts to their compositions. The four songs on this self titled demo are heavy as fuck and have an archaic, dark and unholy atmosphere. The songs are also spiced with some fine and gloomy guitar leads. The production is blameless and heavy as a stream of lava. D. Warrior, the girl handling guitar and vocals, has a demonic voice which fits perfectly to the sinister compositions. Thumbs up for a very promising new band from Italy. "Into Darkness" was originally released on tape via Unholy Domain Records and on vinyl via Iron Bonehead and is now finally available on CD. The tape is already sold out, the vinyl limited to 300 and the CD limited to 500 copies… so don’t waste your time and get your copy before it’s too late. More info at www.facebook.com/pages/into-darkness/283913578336225, http://intodarkness.bandcamp.com, www.hellthrasher.com