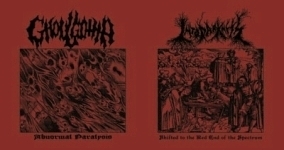 “That band with the wannabe INCANTATION logo and Chris Moyen’s goat on their debut 7” – I remember that first impression about INTO DARKNESS, which made me think that checking them out would be a waste of time, which could be spent on listening to the real deal (INCANTATION) instead. Fortunately, later I discovered by accident that INTO DARKNESS’ music sounds very different, not only from the band whose visual aesthetics they seemed to be mimicking, but also from many other Death Metal bands. INTO DARKNESS play mostly mid-paced, downtuned and rather dark sounding Death Metal, with quite unique sounding (female) vocals. Make no mistake, the lady’s voice is as disturbing as it gets. It just doesn’t sound like the standard type of growl that one would probably expect from such a band. The songs that INTO DARKNESS used for this release is their fastest yet and probably their most various sounding yet. Those who crave some variety and look for a band that differs from the rest, without being artsy fartsy for the sake of it – should check out this split, at least because of INTO DARKNESS. It would be nice if more than just one track was used for their side! Next side presents a relatively new band of Wayne Sarantopoulos aka Elektrokutioner, known for his work in numerous bands, FATHER BEFOULED being the best known among them. This time – Wayne handles the guitar, just as skillfully as he did when he was behind the drum-kit. GHOULGOTHA play doomy Death Metal. While the influences of such bands as AUTOPSY and probably GRAVE can be noticed in this song, it would be unfair to claim that GHOULGOTHA sound unoriginal and just nostalgic – a fact that makes the collaboration between GHOULGOTHA and INTO DARKNESS seem quite logical. When all is said and done – this release has as little as 2 songs to offer, but these are 2 good songs, that leave an impression that both bands are capable of delivering some rather interesting materials in the future. For more information check out: www.facebook.com/ghoulgotha666, www.facebook.com/intodarkness, www.facebook.com/unholydomainrecs