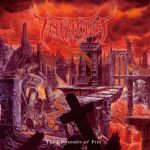 During 2015, Japanese Death Metal legends DEFILED performed live at Metal Barbarism II fest, organized by Primitive Invocation (Bangladesh) and at that time, I had the privilege to witness their ruthless assault from few inch distance, which also made me excited about future Death Metal acts growing in hidden depths inside the Land Of The Rising Sun or Rotten Sun! Fulfilling expectations, INVICTUS, a three piece Death Metal band from Nagano City, formed in 2015 and they are all ready to release their debut full length album named “The Catacombs Of Fear” in early 2020; in co-operation with Obliteration Records (CD, Asia) and F.D.A. Records (CD and digitally, rest of the world). As erupted from the “New Wave Of Old School Death Metal” movement, INVICTUS is hailing as one of the few in Japan that has inherited the 90s old school Death Metal in this modern era and vowed to deliver uncompromising brutality with old school Death Metal essence. Five years since their formation, it seems they have been actively engaged in live and studio recording activities both in Japan and abroad, as besides touring extensively their previous record material were a single “Lord Of The Pit” (2015) released independently, then a split CD with the South Korean band FECUNDATION in 2016 and a two-piece MCD entitled “At The Gate Of Crypts” in 2019, was released under the wing of Obliteration Records (Japan). Gradually evolving their sound, in this debut record the abundance of flesh ripping riff works, shredded guitar solos influenced from early Thrash Metal and lethal blast beats fronted with a versatile Death Metal vocal style encapsulated with a fitting production ensemble a performance full of destructive energy with a menacing atmosphere. And also, flowing connectivity of three skillful Japanese; altogether created a thick, deep and ominous record which will leave you with mutilated experience across 11 tracks, from ‘At The Gate Of Crypts’ till ‘The Catacombs Of Fear’. It’s noteworthy that visually INVICTUS managed some prolific association as Christophe Szpajdel (Lord of the Logos) designed the logo, who also worked on EMPEROR and held solo exhibitions in Japan; Layout by Takehito Seki (bass, INVICTUS) and the sinister album artwork is produced by the prolific artist Juanjo Castellano Rosado (HEADHUNTER DC, UNLEASHED, AVULSED, REVEL IN FLESH), who is said to be Dan Seagrave in Spain. So, if you are a fan of CARNAGE, GENERAL SURGERY, NIHILIST, MALEVOLENT CREATION, GOREFEST, SKELETAL REMAINS and DEMOLITION HAMMER and merciless Japanese aggression then INVICTUS’ debut “The Catacombs Of Fear” is for you and you will surely be convinced that this young Japanese force deserves support and shall keep delivering Death Metal from Nagano to the world! Explore more about the band at www.facebook.com/invictus-483158311865495, and visit their label page at www.fda-records.com.