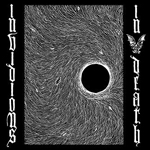 Once more, it is time for some Swedish Death Metal. "Again?" you ask. Yes, again! So, read on if you’re into this fine music, or switch to another review if not. INVIDOUS are around for quite a while now, started as KATALYSATOR and recorded two demos under that moniker before they changed their name. Their first and up to now only release was recorded in 2009, released on vinyl two years later and now, another two years later, Sepulchral Voice Records re-released "In Death". If you asked yourself, why INVIDIOUS are not that productive, I might give you an additional information: the Åhman brothers (Pelle on vocals and Gottfrid on bass) are also active in a classic Metal band that is very active in the last years. Yes, I talk about press and media favorites IN SOLITUDE. Maybe this double burden is the reason why INVIDIOUS aren’t back with new stuff yet. And I think it’s a real pity, because the four tracks on "In Death" are fine food for every Death Metal gourmet of the fine old school. And I mean not only the Swedish school… Of course INVIDIOUS can’t deny influences from NIHILIST, CARNAGE or the likes. But you can also hear a distinct impact of the old heroes from the US. Listening to the opener ‘Black Blood’ made me think of POSSESSED more than once, while the rabidity of ‘Dead Salvation Spawn’ reminds of old AUTOPSY. ‘Throne Of Death’ with its old fashioned lead break and the thrashing finish ‘Visions’ are two more reasons to check out "In Death". And if you mind the sound: I really like this raw, underproduced recording, since it reminds me of the glory days, when demo tapes from new bands were all the rage and waited to be discovered. Check the band: www.facebook.com/pages/invidious/182505538468462, and the label: www.sepulchralvoice.de