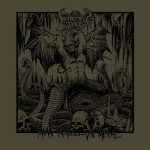 INVINCIBLE FORCE is yet another great band spawned from Chile, a country that, in the last 6-7 years, has experienced a revamping in their underground scene, with lots of great bands; too many to mention here. These guys started back in 2007 and have been releasing material steadily since then. I had only heard their "Advance 2014" demo CD-R when it came out last year and their style hasn’t changed much. It is evil and pounding Death / Thrash Metal done the South American way. There is no denying their influences, mainly from some of the Chilean pioneers like DEATH YELL and ATOMIC AGGRESSOR combined with other big underground names such as VULCANO, HADEZ and MUTILATOR. The production is thick and somewhat opaque. But this adds perfectly to the overall atmosphere and intention of the album. Every instrument has its own place in the mix and adds up to the constant sonic attack on your senses. The delay ridden vocals sound great; yet another detail that places you back in the late 80s style of Death / Black / Thrash Metal in the south of the American continent. The bass is perfectly audible and brings a lot of variation over the buzz saw guitars and some really interesting drum playing. These 4 guys know their game and specially, they know how to get the most out of 2 minutes and 14 seconds as in ‘Scraps Of The Dead’, one of my personal favorites here. If you are a fan of the aforementioned classic bands or any of the new Chilean breed of great bands, you need to add "Satanic Rebellion Metal" to your collection. It is great to know that some of the big underground labels (in this case, Dark Descent Records) is turning its eyes onto South America for a well deserved spreading of their bands and music. Sometimes I do feel that the band should have keep up the high speed outbursts that they display in some of their songs. This would have made the album a lot more intense. Nevertheless, the mid-paced attack of most of the songs makes "Satan Rebellion Metal" a great listen. I was surprised by the ton of riffs that can be found throughout the album. Their songs are short and straight to the point: chaotic and unrelenting but without loosing focus on good songwriting and depth. My biggest complaint and biggest praise here: this album is only 24 minutes long. You can either cry out loud for "more Metal for your buck" or buy this and listen to it 3 or 4 times in a row. Which I do recommend and advocate. All in all, this is a great collection of songs. Buy it now or die! Contact the band here: www.facebook.com/pages/invincible-force/1474237759478433. You can also reach their label here: www.darkdescentrecords.com