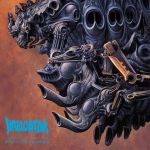 The Danish INVOCATOR are a good example for a band that was a little too late and a little too unexciting to really blow up some dust in their career. Four young boys from Esbjerg started the band in 1987 when Thrash Metal was really a great thing. Like most other ambitious bands in those days, INVOCATOR recorded a bunch of demos and played as many shows as possible. Yet it took them four years to get a record deal with Black Mark Productions, which just started to become a real label and release more than just BATHORY albums. But the musical landscape had changed a lot during those four years and Thrash Metal was not much more than a side note. The Death Metal explosion had just started and thus the technical Thrash Metal of INVOCATOR seemed a little bit outdated. Yet they released two albums on Black Mark and another one on Progress Records before they temporarily split up in 1995, just to reform five years later. The second INVOCATOR album “Weave The Apocalypse” saw the light of day in 1993 and was maybe their best known, as it was graced by a classical piece of art from Dan Seagrave. Nearly 30 years after its release, “Weave The Apocalypse” still is not much more than a mediocre Thrash Metal album that earns some technical merit badges – nothing more, nothing less. Songs like ‘Through The Nether To The Sun’, ‘From My Skull It Rains’ or ‘Land Of Misery’ will surely be of interest for lovers of the genre. Yet there are no songs that really stand out of the mass. Maybe ‘Condition Critical’ (with a moment that sounds like what MESHUGGAH did two years later) and ‘The Afterbirth’ that reminded me a little bit of the first CONFESSOR album can be seen as the highlights of “Weave The Apocalypse”. So, in my opinion, this album could have remained in the closet without any problem, just to be picked out of it any now and then by a Techno Thrasher in a nostalgic mood. But in these times it seems that nearly every Metal record that is at least 25 years old and not complete rubbish has to be re-released, with or without good justice. And now it’s the turn of the first two INVOCATOR albums. Alongside the debut “Excursion Demise”, Hammerheart Records also took care of “Weave The Apocalypse”. For the first time, this album is officially available on vinyl. Of course there is a CD re-release as well and it would not be a real Hammerheart offer if they would not include as many extras as possible. In case of “Weave The Apocalypse”, we have a complete extra CD filled to the maximum. First we can listen to a recording of an INVOCATOR show in Odense, Denmark from 1994. The recording quality is pretty much okay, seems to me like it was a typical soundboard recording, including some overtones and a slight damage of the old master tape. Asides from nearly all songs from “Weave The Apocalypse”, we find the title track and ‘Occurrence Concealed’ from the debut album “Excursion Demise” and a funny cover version of ‘Mr. Albert Fish’ from MACABRE. And since there is a lot of playing time left, we also have the three songs from the “Promo 1992” tape that were later recorded anew for the album. Note here that the master tape has a greater damage at the end of ‘Lost At Birth’. On top, there is some more music in the shape of two cover songs. I haven’t found out when these were recorded, but it is not important anyway. First we have to listen to what INVOCATOR made of ‘The Eternal War’ from the almighty first ARTILLERY album. They should not have done this! In the end, ‘The Promise Of Agony’ from DARK ANGEL comes along quite nicely. In case of nostalgia or a recently detected interest in technical Thrash Metal, visit www.facebook.com/invocatorofficial or www.facebook.com/hammerheartrecords