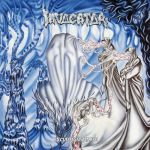 At last! INVOCATOR’s “Excursion Demise” is available once again, for the first time in more than 30 years. Since I’m a die hard old school Thrash Metal fan, I can’t deny my bliss because of this re-release (the only way to get a CD copy nowadays is by buying a bootleg, which is not fair for this band). INVOCATOR’s classic debut was launched in 1991 under Black Mark Production (this was produced by Boss, Quorton’s father and Black Mark owner). After that, they quickly gained popularity in Denmark (where they are from) and Europe (INVOCATOR sold around 10.000 copies of “Excursion Demise” and then shared the stage with some big names such as SEPULTURA, ENTOMBED, ARTILLERY, ATHEIST, DARK ANGEL, IMMOLATION, ASPHYX, etc.). Hammerheart Records has now re-released this stuff as a double CD edition, including a handful of demos and promos between 1988 and 1991 on the second CD. A vinyl edition will be available as well. This album opens with ‘Excursion Demise’, a brutal and fast track that sounds fresh, even nowadays. The apparent first comparison could be DARK ANGEL, especially on “Leave Scars” and “Time Does Not Heal”, but with a more technical approach. Tracks like ‘The Persistence From Memorial Chasm’, ‘Schismatic Injective Therapy’ or ‘Beyond Insufferable Dormancy’ are simply unstoppable and undeniable winners. But to be honest, there is no bad track at all. The composition and performance are perfect in every way possible: outstanding and intricate work on guitars, varied drums patterns, original bass lines and aggressive vocals, sometimes close to Death Metal. Even the production was done differently (I cannot recall another record that sounds like this). The second CD contains the following stuff: “Genetic Confusion” (Demo 1988), “Alterations” (Demo 1989), “Insurrected Despair” (re-recording, 1990), and “Promo 1991”. “Genetic Confusion” kicks off with ‘Dismal Serfage’, a track that sounds similar to KREATOR’s “Terrible Certainty” era (Jacob Hansen vocals performance reminds me of Mille and Ventor from the aforementioned Thrash gods). The music is straight forward here. Follows ‘Insurrected Despair’, ‘Restraint Life’ and ‘The Scars Remain’. None of those tracks were included in the debut album. “Alterations” offers some different elements from the 1988 demo tape. First, INVOCATOR found the sound they were looking for, judging the production here. The vocal performance cannot be compared to KREATOR anymore. The music is way advanced in terms of the technical approach. Three of the four tracks presented here were chosen to be re-recorded for their debut album. The next track is a re-recorded version of the song ‘Insurrected Despair’, which originally appeared in the debut demo and shit, this is fast! This version was initially recorded for an EP planned to be released by Wild Rags, but it never happened, according to Jakob Schultz, INVOCATOR’s guitar player between 1987 and 1992. The second CD closes with the aforementioned “Promo 1991”. It was distributed exclusively for radio shows and zines. Here you will find early and raw versions of ‘Beyond Insufferable Dormancy’, ‘Inner Contrarities’ and ‘Absurd Temptation’. The demo material is excellent for any fan of this classic act. Don’t get me wrong, but what I love the most is INVOCATOR’s stuff on “Excursion Demise”, because of its energy, brutality, speed and technical approach. This album is super-fast, well-written, well-played, top-notch Thrash Metal. You cannot go wrong with this if you love DARK ANGEL, DEAD HEAD, SADUS, DEVASTATION, KREATOR, A.R.G. and so on. Follow INVOCATOR on Facebook at www.facebook.com/invocatorofficial. Label contact: www.facebook.com/hammerheartrecords.