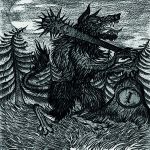 War Metal, Black / Death Metal, Dungeon Metal… call it whatever you want. There’s a primitive, bestial, pungent, putrid style of barbaric Metal that grabs the soul and squeezes tight until our ribcage bursts through our flesh. Columbus, Ohio’s INVULTATION does just that. Other than a demo in 2005, the band consisting of one guy, Andrew Lampe, didn’t release anything else until 2020’s “Wolfstrap”. But damn it was worth the wait. ‘Invocation Of The Black Names’, a nod to ARCHGOAT’s opening demonic speaking, sets the ominous tone of the album until ‘Wolfstrap’ barrels its way through with screeching guitars and hammer-to-nail-at -breakneck-speeds drumming. The vocals are typical for this type of Metal. But it’s exactly what we want. Sure, it sounds like ARCHGOAT, but most everything in this genre sort of sounds alike anyway. It’s sort of like THE RAMONES or MOTÖRHEAD… Just stick to the same riffs and your fans will be happy. ‘Crushed Skull Fetish’ is a burning anthill, swarming with disciplined, deadly creatures. The sweltering guitars and anxiety-filled drums keep the blood flowing and the head spinning in ‘Silvermane Heresy’. Again, nothing necessarily new, but goddamnit, we like it that way. There’s a breakdown in the middle that’ll bring out the neanderthal in all of us if there’s ever a live show we can attend. ‘Predatory Instinct’ keeps up the fist to the face as ‘Mangled Throat Of The Bastard’ (great song title!) slightly slows it down for a brief moment before ejaculating into the mouths of limbless angels in an array of rapid, blurred guitars / drums. ‘Ritual Lupine Savagery’ sounds just like its title. And ‘Venomcraft’ ends the album with a steady diet of bloodcurdling vocals and a musical sound that could wake Lucifer himself. Come on, we all know we don’t want experimentation or diversity in this style of Metal. We just don’t. And that’s ok. Does “Wolfstrap” sound like something we’ve all heard before? Yes it does. But do we love it anyway? You’re fucking right we do. For more info, check out www.facebook.com/invultation, www.facebook.com/fallentemple666