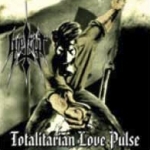 IPERYT suffer from an identity problem. Tagged simply as a Black Metal band in the media, and as well by members of the band (!) this does not do the act any justice nor is it compelling enough to stand on its own as being factually right. IPERYT have also indeed been labeled as an Industrial or even Techno band. Nothing could be further from the truth. These sad attempts at pigeon holing IPERYT could only stem from the unfortunate usage of a drum machine in their recordings (albeit one of the better productions of a machine kit is featured here on “Totalitarian Love Pulse”), along with their choice of sampling here and there throughout the album. However even this is not correct. IPERYT are in truth closer to that of ROTTEN SOUND, NASUM or even GENERAL SURGERY; that type of furious and crushing Death/Grind. With a hint of Black Metal-styled riffs thrown in at random. Of all the tracks herein I can only say that a few such as ‘Adoration Of Social Demise’ had laments of raw Black Metal used and used sparingly. If you don’t mind your Death/Grind as pure as some enthusiasts then by all means pick this album up! Better still, if you can make it, catch ’em live: IPERYT and INFERNAL WAR will be supporting DISMEMBER on their “Scorched Land” tour through Poland starting in early April 2007. www.agoniarecords.com