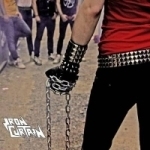 Real Metal, anyone? Did I hear a thousand voices screaming "Hell, Yes!"? All right, here we go! Travel back in time into the glorious 80s! And listen to IRON CURTAIN, from Murcia, Spain. If anyone told me, these guys have released their debut "Road To Hell" in 1983 or 1984, I would have believed it. I maybe only wondered about the great sound they produced. But "Road To Hell" is an album from 2012, and, yes, these guys are serious. Even more, they are true and play Heavy fuckin’ Metal from the heart. Every detail screams "old school"! Just take a look at the cover artwork. Read the song titles: ‘Taste My Whip’, ‘Chain Reaction’, ‘Ready To Strike’… Doesn’t it sound like 80s Metal? Yes it does… I like! Definitely! The first listening is a little bit like being 14 years old again and reliving the magic when you just bought a new record and listened to it for the first time… What I like most about this album: IRON CURTAIN are not copycats, but they take the feeling of the glorious times of Heavy Metal and live it out loud! Just listen to the opening hymn ‘Taste My Whip’… Could fit very well on OMENs epic master debut "Battle Cry". ‘Black Fist’ is a stomper de luxe with a great shout-a-long chorus. And doesn’t breathe ‘Burning Wheels’ the spirit of ACCEPTs classic albums? Sometimes you might also recognize that these guys heard one or two IRON MAIDEN albums. To round the album up, the re-release features a very well done cover of ‘Hit And Run’ from GIRLSCHOOL. Definetly never the first choice for a cover tune… But a tasty one either. All guys and girls, who sometimes share the same feelings like me, should not hesitate and give IRON CURTAIN the chance they have deserved for this great album. Or, to make it short: GET THIS ALBUM!!! Check out: www.facebook.com/pages/iron-curtain/168183273229512 or order it at www.dyingvictims.com