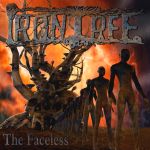 From time to time it occurs that my opinion about an album changes within a few days. After the first listening sessions of “The Faceless” my judgment was pretty clear and straightforward. Heavy Metal, boring as hell with a singer who makes the impression of drunk roaring. But I still listened to the album over and over again, obviously there has to be some kind of mystery how IRON TREE can convince the listener. So what is the secret? Taking the song ‘Chemical Sleep’ as an example, the trademarks of IRON TREE can be identified. First of all an overwhelming joy of playing Heavy Metal, combing more grim Thrash Metal elements with hooklines reminding of the NWOBHM. Other songs know how to impress with attributes like technical, groove, fast, raw and at some moments even Black Metal and Punk influences have their appearance. The song-writing is always on the limit of tipping over into chaos, but never does. So you need definitely more than one round to dive into the universe of “The Faceless”, but you will be rewarded by a unique style of Heavy Metal. Maybe there are more bands playing a suchlike blend, but not that many. And the vocalist? Well, still I am a bit undecided about the performance of Conny Kirsch. But whether you like the singing or not, one thing remains to be said. The vocals are, just like the music, a little off the well-trodden paths. IRON TREE, based in the small town Wiesloch in Germany, are labeling their style Abyssi(k) Metal and as much as I dislike all this fabrications of new genres I must admit that the term Abyssi(k) Metal fits like a glove. A glove of Metal of course, to hint at the iconic MANOWAR song. So anyone interested in an unique and downright album bursting with energy, should visit IRON TREE at www.irontree.de or www.facebook.com/iron-tree-1417516671818070