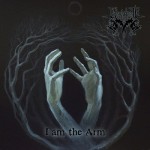 ISCARIOTH
I Am The Arm
(Symbol Of Domination Productions / Satanath Records)
41:49min

ISCARIOTH, a Black / Death Metal four piece from the Moscow area, entering the circle with "I Am The Arm“, their 2015 debut album. A mix of melodic, at times symphonic, Black Metal with a few Death Metal parts. Even though the songwriting is well thought out, persuading through descent storytelling elements. Using the common tricks and gimmicks of song structuring. It’s unfortunately too often to predictable and monotonous. They endeavour to use the strong production they have, properly, but the spark somehow doesn’t jump across. May it be because of the predictable or to weak riffing in between their Black Metal parts. Or the focus on too much artificial atmosphere generated by synthesizers and acoustic guitars. “I Am The Arm” feels on one hand indecisive and on the other independent and mature enough to determine what’s its deeper ground. That’s why I got to admit my little delights on this record are just the Death Metal outbreaks, because they proof ISCARIOTH is a technically good and pressure exerting band. If there wouldn’t be that, so often mistaken, idea of false epic singing. Including the refusal to understand that this kind of singing needs special vocal qualities. All in all the Black Metal parts are in my eyes too whiny and kitschy. And sadly repaint the qualities this album may has. But since it is their debut, it’s worth checking it if you are into those melodic adventures. Therefore visit: www.facebook.com/pages/iscarioth/1545255542416765, http://satanath.com/sodp