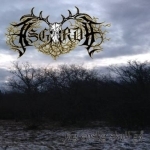 From the small isle of Öland in Sweden, Somath of ISGÄRDE decided in 2015 to spread the unholy word. As even in main capitals it can be difficult to find other musicians sharing the same vision, it must be even more difficult living on an isle, even though the internet makes it possible to run projects without ever meeting personally. Anyway Somath decided to stay alone and to play all instruments by himself. The result of this is his first output ever and full-length entitled “Jag Enslig Skall Gå”. Dealing with the history of his island, Somath decided to use Black Metal as art form to express his feelings and to tell the history of his island with a lot of dedication. After the intro ‘Isgärde’ the first track is already an instrumental track called ‘Battle Of Borgholm’ and delivers solid Black Metal with influences of the Norwegian and Swedish Black Metal sound of the 90s. Bands like GORGOROTH and DARK FUNERAL can be named as influences but also some Folk and Viking stuff has influenced his sound as well. ‘Dying After Dawn’ is the first real track with vocals and unfortunately this is already one of the weak points of this album. Surely he wanted to keep his sound raw and dirty but more polished vocals would have fitted better to the provided material. Also the production is very weak and kept simple and raw but the material would have deserved a better sound as the general direction is melodic and not the way DARKTHRONE did it in the early 90s. The songs are solid with a melodic fundament and Somath is on his way finding his own sound so I think there is still much space and talent left to improve this start as his songwriting deserves a better production and maybe some more time to be developed and to grow. Not bad but could be done better as the production really spoils the good moments. Anyway more info can be found at the following locations: www.facebook.com/isgärde-985896741527921, www.satanath.com/sodp