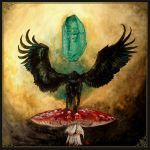 There is not too much information about this new Death Metal act out there. Including members from Germany and Spain, “Smoking Mirror – MMXVIII” is the first recorded effort by this trio, whose enigmatic members are J. on bass and vocals, D. drums and A. on guitars. Released independently by the band itself on tape last year, this 4 tracks demo was re-released on CD by Nigredo Records and on vinyl by Pulverised the current year. The first notes sound really promising. This kicks off with ‘Jade Emperor’, a well-balanced track charged with different tempo changes and great arrangements on guitar. ‘Dead Stone Mask’ is the second track here. Some passages are a bit melodic, but not in a bad way. ‘Blossom’, the next composition, is faster than the previous ones. The last song here is ‘Smoking Mirror’, a good track to close this little piece of Death Metal. The general result is some kind of Death and Doom Metal that sounds fresh enough for the actual standard (too many clones out there), but with a more melodic and atmospheric approach, in my humble opinion. The introduction of screams à la BÖLZER in every track is a good idea, but this element could be a good reason to be compared often with them, along with their sounding (this is not necessarily bad). I guess every band is searching for its own identity… am I wrong? Anyway, the music is good, the performance is good, the production is good and a good dark atmosphere makes this first effort a good first release. If you’re a fan of the aforementioned Swiss act or just interested in hearing new stuff from contemporary bands, this is a good recommendation for you. Follow this new act at Facebook here: www.facebook.com/jadestonemask. Get a CD copy here: www.nigredorecords.org