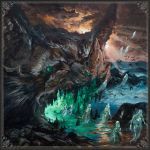 JADE is an atmospheric Death Metal trio that was formed in 2018 and whose members are from Germany and Catalonia, Spain; having only released in their year of creation the “Smoking Mirror – MMXVIII” demo. “The Pacification Of Death” consists of 6 songs that easily could be only one musical piece. The brilliant cover art was made by Adam Burke (the one who also made “Horizonless” by LOSS), representing the poetic concept of the whole album. Meanwhile the recording, mixing and mastering was executed by Javi Félez (owner of Moontower Studios and musician for TEITANBLOOD and OF DARKNESS). The production of “The Pacification Of Death” is excellent. The sound of the guitar, bass and drums is clean but despite this, the brutality is not forgotten. Every tone and riff can be easily distinguished while they are covered by deep obscured growls and a clean choirs. One thing that made me enjoy the transitions between the musical formulas of “The Pacification Of Death”, is the use of a synthesizer in the culmination of ‘Silk Ransoms’, ‘Ghastly Eyes’ and ‘The Saddest Night’. JADE is one of those bands that have the guts to create something new, obscure and melodic, not for everyone. I can imagine the police department of Metalheads around the world hating this album and comparing it to BOLZER. And yes, the influence on their sound can be distinguished in some riffs, the clean vocals and the guitar distortion; but without failing into the nothingness of ripping ideas. I am tired of listening the same things over and over again; in Death Metal, Black Metal and Doom Metal. The term of old school makes me sick, sounding old does not make the band great and unique; but the business is part of the human condition, right? For me, JADE has created one of the best albums of 2022. This review is kind of short, but I prefer that you listen to “The Pacification Of Death” instead of reading me. If you are into QUESTION (México) or BOLZER, JADE will be part of your collection without hesitation. More info at: www.facebook.com/jadestonemask, www.facebook.com/pulverisedrecords