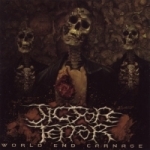 According to the info sheet, JIGSORE TERROR from Sweden formed in 2001 to p(l)ay tribute to their favourite old school Death / Grind acts like REPULSION, TERRORIZER and early DEATH. If this triumvirate belongs to your faves, chances are likely that JIGSORE TERROR might appeal to you, too. They fiercely blast through 15 songs and intersperse angry mid-tempo mosh parts. The level of songwriting does not reach the genius of the old heroes, but is still intense enough to kick ass immensely. As for the production, NASUM’s Miezko Talarczyk did a good job and delivered a raw and dirty sound which fits perfectly to the old school approach. To keep a short review short: this is an excellent Death / Grind release in the tradition of the late 80s / early 90s and if you can’t get enough of crushing blasts and riffs, you’ll find a lot of them on this record. To get your own impression, you can download the opening track ‘Gorging On Exposed Arteries’ from the sounds section of www.listenable.net.