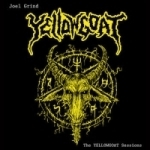 I guess most of you are aware of Joel Grind’s TOXIC HOLOCAUST band. Joel never hide his obsession with Punk music and primitive Thrash, the combination Quorthon experimented thirty years ago. That leads us to the Grind’s pet project, YELLOWGOAT. Fans of BATHORY will catch the pun immediately to make the connection with the first pressing of the BATHORY self- titled album which was adorned with the now legendary yellow goat print. Indeed, what Joel offers us here is his personal tribute to the now gone Swedish master of early Black Metal, a genre Quorthon invented entirely by himself (and don’t tell me about VENOM, please…). On the “Yellowgoat Sessions” we got eight tracks of raw to the bone Thrash / Speed Metal with a Hammer Horror satanic vibe (some titles are a little bit tongue in cheek, like ‘Hell’s Master Of Hell’ for example) and a sleaze edge, the whole being enclosed between symmetrical intro / outro in the best of the BATHORY tradition. No need to add that any trace of originality is absent here, but it is not the goal aimed at in the first place. One have to hear this with BATHORY in mind to measure how much Joel’s tribute is tasteful and sincere. Of course, the original atmosphere of the two first BATHORY offerings are not fully reconstituted here; after all, Quorthon recorded his two inaugural offerings in perilous conditions (more than often drunk with a makeshift gear / studio) impossible to recreate by an act of pure reasoning. But Joel’s captured enough of this to let out a very convincing approximation that could have advantageously replaced “Requiem” or “Octagon” in the BATHORY’s discography. This opus is on sale on digital format, and for the collectors, a vinyl edition is also out and apparently selling fast. The cover, depicting… a yellow goat, was drawn by legendary artist Chris Moyen. This record is obviously a labour of love and respect, and should be considered a mandatory purchase for all the BATHORY fans. Those who buy the digital files will receive a extra-bonus track ‘Pentagrammaton’, to add to a really good release. For complete info: www.joelgrind.com