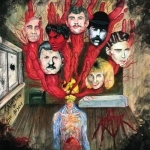 JT RIPPER
Gathering Of The Insane
(I Hate Records)
36:35min

I didn’t know what to expect from such a name as JT RIPPER. But then I noticed that this album is on the Swedish label I Hate Records. So then I knew it had to be something worth listening to due to Peter’s (co-founder and owner of the label) great taste when signing new bands or releasing albums. Founded in 2010 the German outfit JT RIPPER plays a perfect mix of Thrash and Speed Metal with some Death Metal influences. They have released a demo tape, a split 7" and their debut album before "Gathering Of The Insane". I took some time to listen to their previous works and their sound has been really improving and getting heavier and faster. One can assume that their lyrics deal with some of the characters on the album cover (serial killers). This is good, since it reminded me of MACABRE and POSTMORTEM, which have covered the concept extensively. The songs are 3-4 minutes long. Although they are rather short, they are also straight to the point and full of tasty riffs. Production wise, the album is consistent. The sound is not massive and / or overproduced. Actually, it is a bit muffled and that adds a very welcomed mid 80s vibe. On the other hand, the songwriting and some of the riffs do have a bit of Death Metal influence. All these dynamics and nuances really help on keeping the listener interested. I didn’t skip one song at all and actually listened to this twice in a row. The mix is pretty good leaving enough space to every instrument. Bassist Steven’s vocals are coarse and raw. They have that "signature" delay of some of the first Thrash / Speed / Black bands from back in the day (ie. POSSESSED), so they fit the music perfectly. Chris takes care of the drums and his beats are pretty straight forward with some neat and tricky fills. His performance is really good when accentuating both, the heavy and the fast parts. Daniel’s guitar riffs are mainly tremolo based with some pretty good and memorable open parts, sustained perfectly by a prominent bass guitar, which I absolutely dig. As a power trio, the band needs that bass to be present. JT RIPPER show their conviction and dedication to their music on "Gathering Of The Insane". The album never lets go and it gets better as it runs its 36 minutes of intense Thrash / Speed Metal. Fave songs: ‘Chaos’, ‘Maze’ and ‘Second Skin’. Show some support for the band here: www.facebook.com/j.t.ripper.thrash. And contact their label to get the album here: www.ihate.se