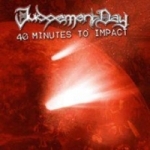 After 15 years of activity in the underground Dutch JUDGMENT DAY finally come up up with their second album "40 Minutes To Impact" – roughly nine years after their debut. I remember one live show in Leer some years ago and I was quite impressed by their Thrash-influenced Death Metal bearing slight resemblances to older DEICIDE or MORBID ANGEL and that certain Dutch extra element… perhaps a more European style of composition. The only aspect that marred the effectivity of this great live band were some rather uninspired semi-melodic / technical riffs thrown in here and there. And now back to the present: JUDGEMENT DAY present us a mixture of old and new songs, dating from 1995 to 2002. To be honest, the result is not really what one would called outstanding. Even though there are plenty of cool moments in their songs – some groove, straight brutal parts, thrashing riffs – the band still uses these above mentioned riffs that sound neither really technical nor dark nor brutal, therefore leaving a mixed impression… certainly no big impact on the listener, I am afraid. The production itself (done by the band) is quite clear but could have been more massive in my opinion as there are no technical aspects on this record which could get drowned by too much distotion and punch. In a way this thin and transparent production even underlines the weaker side of JUDGEMENT DAY which is sad as the band has potential. I recommend you check these guys out in a live situation which is much more impressing than this CD. Let’s wait for the next one… One question is left: When "New Aeon Media picks up talent (sic) from the underground and supports new acts" then why did they sign this band? After 15 years of existence in the underground I wouldn’t call them talents (rather veterans, hehe) and certainly not a new act.