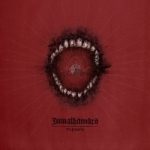 Weird. Strange. Chaotic. And yet deep within there is a perfect balance between sanity and despair that makes the music of this band based in Finland to be quite interesting. The first song ‘Ectasy In Blood – A Ballad’ starts with a lo-fi rehearsal like Black Metal sound to enter then a very psychotic state of furious Black Metal with some sort of repetitive yet hypnotic riff and some very weird and sometimes off keyboard sounds, that at the end, match in a very perfect way the music. This band has a lot of experimental sounds enclosed in this release. At some point that kind of experimentation reminded me to the way DEATHSPELL OMEGA started doing in their “Si Monumentum…” album, but just to make a reference. The band is also doing their music in a variety of speeds that are also giving this release a dynamic hardly found nowadays…’Storm Is Coming’ is a perfect Doom / Black Metal chant that has a haunting main riff, which more than once reminded me of the Dutch old school of Doom / Death Metal, with very dramatic passages. Another thing to notice is the perfect production. Almost perfect in the sense that it matches the music the way it should be. No, it is not a pro-tools infested recording, it just has the right balance of all elements. Add to that a very competent performance in all fronts… great drumming, great vocals, which in this case also range form black top Death Metal… the guitars are up-front but do not sound that massive that eats the bass … perfect in way that it is imperfect. After a few more listening things will start appearing as a first time… yes, that is the great virtue of this record that makes you discover things each time you listen to it. Probably my favorite song will be the one giving title to the album. But in all this is a fascinating discovery of dark, mystic and despair-influenced Black Metal. As their name means “Twilight of the gods”, this is a revelation of gigantic and dark proportions that must be heard. A great release. www.ahdistuksenaihio.com